The Oscars again had people enthralled this year. While there was not any controversy like last year, there were still some exciting moments.

Jimmy Kimmel hosted this year and took jabs at both Trump and Hollywood. He also continued his feud with Matt Damon, once hijacking the orchestra and playing Damon “off” when he was presenting an award. Sophomore Kacy C. said, “I thought it was hilarious, because Jimmy Kimmel has a certain thing about him that whenever he hosts something just brings piece of himself to the job, making it his own and I really admire that.” According to a poll sent out to the school, 77.7% thought that Kimmel did a good job as host.

The first award given out was for Best Supporting Actor. Mahershala Ali won for his role of a drug dealer in the film Moonlight. Ali became the first Muslim man to win an Oscar. Many people thought Ali deserved the award, while others thought Dev Patel should have won for his portrayal of an Australian man searching for his biological family in India in the movie Lion.

The award for Best Director went to Damien Chazelle for his musical La La Land. Others thought that Barry Jenkins should have won for Moonlight. Also, Mel Gibson was nominated for the war movie Hacksaw Ridge, which was his first nomination since being outed by Hollywood.

Casey Affleck won Best Actor for his role as grieving janitor Lee Chandler in the Massachusetts set film Manchester by the Sea. Others thought that Ryan Gosling should have been the winner for playing the jazz musician Sebastian Wilder in La La Land. Denzel Washington also got support for playing father Troy Maxson in Fences and so did Andrew Garfield for playing the pacifist soldier Desmond Doss in Hacksaw Ridge.

Next, Zootopia won Best Animated Feature. The film explores racial prejudice among animals. In a school wide poll, Moana, a film about a Polynesian goddess, barely edged out Zootopia. 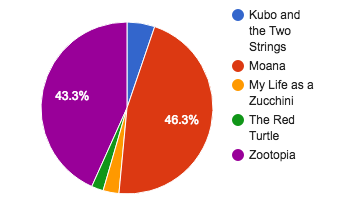 “City of Stars” from La La Land won Best Song. John Legend performed it along with the other La La Land song “Audition (The Fools Who Dream)”. Many people thought Justin Timberlake’s “Can’t Stop the Feeling!” from Trolls  could have gotten the prize. Most people thought “How Far I’ll Go” written by Lin Manuel Miranda from Moana should have won too. If Miranda won, he would have an EGOT, an Emmy, an Oscar, a Grammy, and a Tony. Finally, Sting played a touching tribute to journalist James Foley, who was killed by ISIS, with “The Empty Chair.”

Best Actress went to Emma Stone for La La Land. Others thought Natalie Portman’s portrayal of Jackie Kennedy after the assassination of President John F. Kennedy should have won. Stone said in her acceptance speech, “I still have a lot of growing and learning and work to do.”

Viola Davis won Best Supporting Actress for Fences and gave a moving speech afterwards. Davis said, “I became an artist—and thank God I did—because we are the only profession that celebrates what it means to live a life.” She also thanked Denzel Washington, who starred and  directed the movie, and August Wilson, the original playwright who wrote the play Fences. Davis became the 23rd person to win an Oscar, a Tony, and an Emmy and was also the first African-American actor to do so. Sophomore Kacy C. said, “You could really feel how proud she was to be telling other people’s stories and how passionate she is about her work.”

By far the biggest and most shocking moment of the night came when Best Picture was announced. At first, La La Land won the award. Then, during the middle of producers giving acceptance speeches, Jordan Horowitz, one of the film’s producers, said that Moonlight was the actual winner. The wrong card was given to the presenters of the word. Barry Jenkins, director of Moonlight, said, “Very clearly even in my dreams, this couldn’t be true. But hell with it! It is true!” 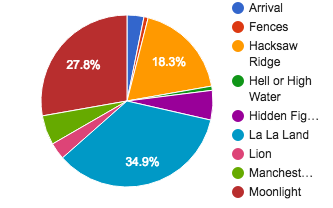 Other movies nominated were Arrival, about aliens coming to Earth, Hidden Figures, about the black women who helped NASA’s space program, and Hell or High Water, about bank robbers who try to save their family ranch.

What do you think? Cancel reply